Mother Nature does nothing malicious!

In the conventional medicine prevailing in our country, “cancer” is generally regarded as a “mistake of nature.” A breakdown of the so-called “immune system” as something “malignant,” which tries to destroy the organism and therefore has to be fought and eradicated with all available means of a medical-military strategy.

In Germanische Heilkunde®, the so-called cancer diseases are only particular phases:

They are nothing malicious anymore, but have become understandable with the history of human development as Sensible Biological Special Programs (SBS) of nature. Since we know the IRON RULE OF CANCER (ERK), we know that scheme cancer develops and can also be stopped.

In Germanische Heilkunde®, everything arranges itself according to these development history criteria and the five regularities copied from “Mother Nature” as if by itself. It is the first systematic classification of the whole medicine because it is the development-historically oriented classification according to germ layers affiliation: The inner (endoderm), the middle (mesoderm), and the outer (ectoderm) germ layer, which is already formed at the beginning of the embryo’s development. Each cell or organ of the body can be assigned to one of these so-called germ layers and each of these germ layers. Also, developmentally certain brain parts and also histological formations belong.

Let’s look at the diseases or special programs that are controlled by the brainstem. We see that they also have an ordered localization there because they begin on the right dorsal side with the mouth’s diseases and end on the left dorsal side with the sigmoid and bladder carcinoma. They all have the same histology = adenocarcinoma. Therefore, this means that there is a self-evident order between the arrangement of the brain relays and the organs of the gastrointestinal tract, together with their appendages.

The microbes’ ontogenetically conditioned system now also assigns the microbes to these three germ layers, whereby the oldest microbes, the fungi and fungus bacteria (mycobacteria), are responsible for the endoderm, conditionally still for the cerebellum mesoderm, in any case, however only for the old-brain-controlled organs.

All brainstem relays contain conflicts in which it is a matter of getting hold of a morsel, swallowing it, digesting it, excreting it, etc. Even if the biological conflicts are to be understood only development-historically, as archaic conflicts, which the animal feels mostly still natural, we humans still feel them in such a way. Only that we experience these biological conflicts now quasi cultivated, one could almost say paranoid. A package of shares, for example, we now feel like a morsel and suffer a biological conflict if we lose it. 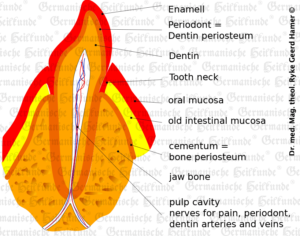 In the natural context, this bundle of paper would be, of course, completely worthless. All designations of the “biological conflicts” are, however, in such a way selected that they can have at the same time for the mammal (real) validity, as well as for us humans in the possibly transferred sense.

The glandular tissue in the mouth area

In the case of submucosal oral cancer, the conflict is always “not being able to get hold of a morsel.” It is very common in severely ill patients who can no longer take in food properly, e.g., pain. Here we find a flat growing and only low height reaching adeno-ca under the mouth’s squamous mucosa, which is practically not visible in the ca-phase. Developmentally, this belongs to the ancient oral mucosa, which is now primarily covered. In the healing phase, we then see a so-called oral thrush or thrush fungus in the mouth.

The same applies to the sublingual gland Ca (acinar portion). A compact glandular-sublingual-Ca of the salivary “acini” grows with cell proliferation in the ca-phase. In the pcl-phase, fetid caseation and degradation of the tumor by fungi (mucosas) or fungal bacteria (mycobacteria, e.g., TBC) then occurs. In case of a total caseation of the glandular cells (after several recurrences including solutions), cystic fibrosis results, i.e., a drying up of the sub-glandular salivary fluid (saliva).

In palate-Ca, the specific conflict content is “having already grasped the morsel but not being able to swallow it.”

For example, a patient believes in winning the lottery, but the acceptance office has inadvertently registered his lottery ticket. After the DHS, the organism develops highly specialized digestive juice-producing adeno-Ca cells, which break down the too large morsel so that it can be swallowed; because to be able to ingest the morsel or not means life or death in nature. In the pcl-phase, then cheeseification and clearing of the particular cells are no longer necessary with fungi or TBC.

Tonsil-Ca (cervical tonsil-Ca) involves a conflict of “not being able to swallow a morsel.”

Example: An apartment is already firmly committed, but at the last moment, the rental contract falls through, i.e., someone else has snatched the morsel away (apartment, house, workplace, etc.).

We have always regarded microbes as something “evil” that we had to eradicate. That was sheer nonsense! We need the microbes urgently, namely the whole pallet, which is usual in our latitude. If, for example, “for hygienic reasons,” we lack the mycobacteria (TBC), then we cannot break down our tumors in the healing phase. This has disastrous consequences for a range of tumors: A colon Ca, for example, can cause significant complications and must be surgically removed. In the case of a thyroid-Ca, this means that large amounts of thyroxine continue to be produced. In contrast, if the corresponding mycobacteria had been present (during the healing phase), the thyroxine level would have dropped back to normal.

A tuberculous cure in the mouth, esophagus, or stomach results in bad breath.

The squamous epithelium in the oral cavity

But some organs are functionally assembled from several parts of different germ layers. Our development history research, the embryology, had let us down at this point: We find nothing or almost nothing about the “squamous epithelial migrations” in the ” new brain era.” And this was precisely the weak point, why we could never understand the nature of tumors. We had not understood the brain and knew nothing about the “squamous migrations” of the cerebrum ectoderm developmentally.

According to the 3rd law, The ontogenetically conditioned system of tumors, we know that all cells or organs developed from the outer germ layer have their relay in the cerebral cortex. The conflict-active phase makes cell fusion in the form of ulcers, ulcers, or a loss of function on the organic level (e.g., diabetes).

If we now consider the nature of the ulcer, its very nature is a substance defect. We find this process in all squamous cell carcinomas, including oral ulcers-Ca. The conflict is always an oral conflict.

Example: A driver has to blow (with his mouth) into the hooter and loses his driver’s license because of alcohol. Or – a father shot sneezing powder in the son’s face in a quarrel, also hitting in the mouth.

We find the same process in the case of tongue-Ca. The unique conflict content here is speechlessness.

For example, one patient was struck dumb when his boss yelled at him, “Don’t you have a tongue in your mouth that you can’t say a word?”

In sublingual salivary duct ulcer Ca, we always have a conflict of “not being allowed, able, or wanting to eat (insalivate).”

In all squamous epithelial Ca, which roughly speaking have their relay center periinsularly, we find a repulsion of the cancer cells, especially if the epithelial matrix is still intact, i.e., if it has been a superficial ulcer. Since the outermost layer of the squamous epithelium always faces outward, i.e., the outside world, the organism simply repels the tissue outward and produces new squamous cells from below, just as it usually does. Imagine how many millions of such squamous cells are shed from the oral mucosa of a dog when it is professionally working on a bone. Therefore, in these cases, cancer disappears completely, either with restitution ad integrum, if the matrix was not yet affected, or with scarring healing.

While the mycobacteria work on the tumors controlled by the old brain in the healing phase, it is exclusively viruses (if they exist) that take over this particular task here with the “tumors” controlled by the cerebral cortex (ulcers, ulcers, etc.). The viruses (if they exist) are not independent living beings, like the bacteria, but only complicated endogenous protein molecules, which multiply – and exclusively in the healing phase after the conflict resolution (CL) – and help in the reconstruction of the ulcers of the skin and the mucous membranes. If we had previously believed that we also had to eradicate viruses (if they existed), now things look very different: Instead, we must ensure that the appropriate special microbes are always present for a corresponding healing phase to optimize the healing process.

Note by GHK Academy: No microbes work in the healing phase with the squamous epithelium. The viruses do not exist!]

Since we did not know the difference between brain-controlled organ changes and cerebrum-controlled organ changes (see an ontogenetic system of tumors and cancer equivalent diseases), we could not find any similarities. If we thought to find some, they were wrong, as we can see, e.g., in the so-called tumor markers, which in retrospect were utterly nonsensical and mostly meant the opposite of what we attributed to them.