Germanische Heilkunde® not only concerns medicine alone! It concerns us all as humans and how we deal with each other. A new era will begin …

Comprehension of the processes

Medicine is no longer the hallowed science that only a select few knows, and people are forever at the mercy of (gods in white). Everyone can understand and comprehend the processes in the body. He can anticipate processes and adjust to them.

Serenity in the face of symptoms and diagnoses.

Through knowledge of Germanische Heilkunde®, occasional symptoms and diagnoses are perceived without panic, considered calmly, and treated responsibly.

Press news about medicine is no longer believed uncontrolled but is checked on the Germanische Heilkunde®. Only those that really bring new knowledge and do not contradict it are taken seriously.

In Germanische Heilkunde®, the patient is the boss of the procedure. Knowing the situation, he takes responsibility for the treatment and his life. This may be an unwelcome consequence for many people, but they can always hand over others’ responsibility and be treated as sufferers (patients).

In dealing with people

It is possible to kill a person indirectly by a word if this word triggers a biological conflict in him, which he cannot cope with. This is especially dangerous in the area of self-esteem. Therefore, caution is vital with children because they are often incapable of talking about their conflict with other people or accepting it as natural when it comes from authority and when they react sensitively.

Unthinking words can lead to depression or schizophrenia, making a living together even more difficult and leading to a vicious circle.

“Go, dear Schleich, according to your whole temperament, you cannot believe it, the last reason of resistance to an innovation in medicine is always that hundreds of thousands of people live from the fact that something is incurable because the law of economic egoism is stronger than any idea of humanity.”

Doctors’ fees must be charged differently, as doctors must take more time to talk to patients. A doctor’s earnings will go down drastically otherwise, especially the earnings of specialists and surgeons. A study commissioned by the U.S. Congress found that in 1974, in the U.S. alone, 2.4 million unnecessary operations were performed at the cost of $4 billion, with 11900 people dying unnecessarily. The number of unreported cases is much higher, and according to the Germanische Heilkunde®, this number would increase to the astronomical.

A large space must be created for psychological care in countries with a point system.

Many laboratories for unnecessary research in ever-smaller areas will become redundant, and the money can be used for other areas. This, of course, means an enormous loss of funds and jobs for the many research centers.

In a month-long doctors’ strike in Israel, hospital admissions fell by 85% and deaths by 50%. A 52-day physician strike in Colombia decreased deaths by 35% (New England Journal of Medicine).

Unemployment for medical and paramedical professions

Germanische Heilkunde® will eliminate many jobs in the medical field. The workers thus freed up could be employed, for example, in life and conflict counseling, which is very personnel-intensive. Other possible applications are in environmental protection or psychological counseling.

Losses in the pharmaceutical and device industry

The pharmaceutical industry’s profits are in the billions, as well as the profits of the equipment industry, which builds more and more complicated and short-lived, but multi-million dollar diagnostic equipment, which according to the Germanische Heilkunde® will become 90% obsolete. A full-body scanner costs about 2 000 000 DM.

The American pharmaceutical industry spent about 86 million dollars in 1988 to support 36 000 medical conferences.

Cancer support groups and other aid organizations will have to change their work. Many donations that have gone to cancer research will no longer be needed, and many employees will be laid off. The American Cancer Society (ACS) receives about 100 million dollars in donations per year, while German Cancer Aid receives 25 million DM per year under Mildred Scheel.

In the fairway of “the fact of incurable cancer,” countless companies are doing their business with alternative and natural products. If the Germanische Heilkunde® is true, many have to stop their productions. We do not want to talk here about the honest businessmen who try to prepare our food naturally.

The entire medical research must rethink. Instead of always penetrating smaller dimensions to find the illness’s cause, it must be started now in higher levels. Again, it is necessary to investigate the biological development and the role of the biological conflicts that have developed here.

On the other hand, more holistic research of the human being and his dynamic behavior must occur if one wants to create possibilities to help the “sick” human being become healthy faster, better, and in general.

Retraining of the doctors and the nursing staff

Since in Germanische Heilkunde®, many things are different from the present official medicine, the doctors and nurses have to rethink and retrain because much of the knowledge learned at the university is wrong.

Today’s preventive medicine is based on the hypothesis that a disease is caused either by microbes or by a degenerated cell, which then multiplies like crazy and forms tumors.

Not only has Germanische Heilkunde® doubted these hypotheses, which have been elevated to dogmas, but more and more physicians have become aware that this view cannot be correct. Unfortunately, currently, there is no more dialogue between the researcher and the doctor at the bedside. Worse, a huge gap has opened up between experimental and practical medicine, which has even developed into a language of its own for each direction and, therefore an impossibility to understand each other at all.

The Germanische Heilkunde® proves that the hypotheses are wrong. Therefore, preventive medicine must also be built on a different basis. The future of preventive medicine lies not in a campaign of extermination of all microbes and a radical, relentless, “deep into the living” pursuit of the last degenerated cell but in psychological information and care of people based on biological laws. To this end, a review of the working conditions, the educational conditions, and the living conditions of the people.

If the biological conflict is the root cause of a disease, both the way the diagnosis is made and how it is communicated to the patient must change.

Most cancer patients today die as a result of medical diagnosis and prognosis. It is the diagnoses or prognoses that trigger the supposed metastases. They are the causes of new biological conflicts.

According to Germanische Heilkunde®, no doctor any longer has the right to make a divine prognosis concerning a patient’s survival.

Each case is different, and the further development of a disease depends on the patient and not on external circumstances. The doctor can and should say the probable development of the symptoms if the course of the “disease” is normal according to the two-phase rules. Since there is always a cure at the end of this two-phase, there is no need to anesthetize any patient with a hopeless prognosis in such a way that it applies as intended.

If Germanische Heilkunde® proceeds differently in many areas than previously assumed, the current therapy in these areas must logically also be wrong. This is especially true for the two-phase nature of the disease.

The nonsense of animal testing

“Not a single animal experiment to date has advanced medicine one step.” Many doctors and organizations have made this claim for a long time. Germanische Heilkunde® provides evidence that it is correct. Every animal suffers precisely the same biological conflicts as humans. Since these conflicts are not taken into account in experiments, the results must be wrong.

Due to the separate biological development of animals and humans, different behaviors have emerged over time, leading to the fact that a particular animal reacts to a specific event differently than humans. Thus, experiments with cigarette smoke have shown rats suffered a death anxiety conflict and the corresponding lung cancer due to heavy smoking. Simultaneously, hamsters were not bothered at all by cigarette smoke and, on the contrary, lived longer than non-smoked comparison animals.

The solution to the puzzle is simple. Rats live near the surface and have evolved an escape program from the smoke. They were a sure sign of a developing house fire in the Middle Ages. Suppose you keep them in the danger zone under laboratory conditions. In that case, they will, of necessity, develop either a biological conflict of “can’t run away” or a conflict of “I can’t smell that” or a fear-of-death conflict or all three at the same time. If you allow the conflict situation to persist long enough, you will find bronchial cancer, osteolysis, and lung cancer in many of these animals after release. One then concludes from this that cigarette smoke causes cancer.

On the other hand, the hamsters, from their biological development, do not know the smoke because they live mainly on the ground. In contrast to the rats, the hamsters in the same test arrangement with cigarette smoke experienced no conflict at all, since they did not have an appropriate program. They logically also do not “get sick” with any cancer but make themselves, on the contrary, the vital components of the smoke to use and live thereby even longer than the non-smoked animals. From this experiment, the conclusion should be drawn that cigarette smoking is healthy, even life-prolonging. Since this conclusion did not fit into the dogma, it was simply ignored. 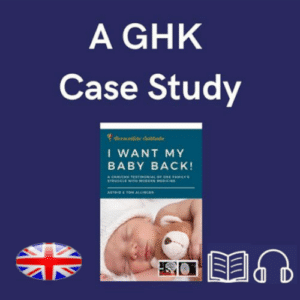 I WANT MY BABY BACK! – e-Book + Audiobook