The Dirk Hamer Syndrome (DHS) “caught on the wrong foot.”

Since time immemorial, people have felt a connection between psychological conflicts, emotions, and drastic experiences and shocks in people’s lives, such as the death of a partner or child. Among other things, our German language bears eloquent witness to this in countless idioms and expressions.

How many men in his way of expression had already approached the biological conflicts? Their essence and content will be briefly touched upon in the following:

The knowledge, which was always present, got only in the 20th century with physicians and scientists entirely out of the view, actually most surprisingly, after the partly already excellent approaches to the matter’s core.

Today we humans have lost mainly the relationship to our environment and our fellow creature animal. The more or less instinctive idea of “intellectual conflicts” could develop, which has no relation to biological reality. According to archaic biological control circuits, the human being feels and feels, in reality, feels conflicts biologically, while he imagines thinking detached from nature.

The DHS is Dirk Hamer Syndrome, which I named it when I was so shocked at my son’s death and came down with testicular cancer. It is a severe, highly acute dramatic, and isolative conflict experience shock that gets the individual “off on the wrong foot.”

DHS has the following characteristics and meanings:

There is no conflict per se, but every conflict always has a very specific content. This is defined in the second of the DHS. The conflict content arises associatively, i.e., through involuntary thought assignment and mostly past the filter of our mind.

Only the sensation at the moment of the DHS decides on the conflict content, and thus on the “track” on which the further biological conflict proceeds. Thus the subconscious associates the conflictive content of the DHS-triggered biological conflict to an imaginary biological area, e.g., area mother/child relationship or area territory or area water or area fear in the neck or area self-worth or similar areas. Here, too, the subconscious – in the second of the DHS – knows exactly how to differentiate: Never does a self-value collapse (SWE) in the sexual area, e.g. (“you wimp”) make osteolysis of the cervical spine, but always pelvic osteolysis, pelvic cancer. Never would make an SVC conflict in the mother/child relationship (“you raven mother”) make osteolysis in the pelvis, but always a cancer of the humeral head on the left (in the right-handed woman).

We think that we think. In reality, we are thought with.

This conflict shock, which catches the individual unprepared “on the wrong foot,” is, however, a necessity so that the organism can switch over to an emergency or special program to be able to cope at all with the unexpectedly occurred situation. Because in the moment of this DHS, the special program switches on, practically synchronously: In the psyche, in the brain, and at the organ and is also detectable, visible, and measurable there! For example, in the computer tomogram of the brain, these changes (Hamer Focus) then look like concentric rings of a shooting target or like the picture of a water surface into which one has let a stone plop.

Precisely from the DHS, the patient has permanent stress, i.e., he has completely cold hands and feet, thinks about his conflict day and night, and tries to solve it. He can no longer sleep at night, and if he does, then only in the first half of the night, half-hourly, he no longer has an appetite, and he loses weight.

This condition does not change again until the patient has resolved this conflict. Then immobilization takes place. The psyche has to recover. The patient feels limp and tired but is relieved and has a good appetite. The body is hot, often fever, often a headache. The patient sleeps well, but usually not until three o’clock in the morning. This mechanism is arranged by nature so that individuals in vagotonia do not sleep until daybreak so that potential danger (e.g., predator) does not surprise them in their sleep. All patients sleep a lot and very much during the day.

Since we usually want and must reconstruct this DHS later, so for us, the fact that we must be able to find it on all three levels is a great chance for our psychic-organic-criminalistic researches! We have now, for the 1st time in medicine, the possibility to calculate correctly with our supposed “diseases,” which we call now parts of “Sensible Biological Special Programs” (SBS), as we could calculate in former times already, for example, with a pregnancy.

This criterion makes the Germanische Heilkunde® already from the beginning a science in the strictly scientific-biological sense. It enables us to reconstruct and reproduce any case in medicine that had never existed before.

The DHS is the basis of the Iron Rule of Cancer, is the linchpin of all diagnostics. It is beautiful that we can now really calculate and understand. We have to mentally slip into the patient’s skin for this moment of the DHS and imagine how the overall situation was at the second of the DHS at that time. Only from the situation at that time can we then understand why this problem hit someone as a biological conflict, why it was so dramatic, why the person was isolated at that time or had no one to talk to about it, and why the problem was conflictual. If you touch a person’s DHS, he usually gets misty-eyed. Signs of his emotional affectivity. Therefore, it is important to understand the DHS very well because then you have already understood half of Germanic Healing®.

But in the second of the DHS, more can happen:

In this second, the tracks are laid. Better said, the further tracks are laid, which always run along in the following time, on which the train always rolls again in the following time. Because man and animal “notice” in the second of the DHS, without being aware of it, also the accompanying circumstances of the DHS. The individual remembers not only the smallest details in the moment of the DHS as with a flashlight snapshot but also tones or sounds, smells, sensations of all kinds, and taste sensations and – the individual keeps these records practically lifelong. From this, we can see that they are qualitatively different from those we usually experience and remember. If one of these circumstances occurs again later, then the whole conflict can return as a so-called recurrence. This means that one always goes from such a side track to the whole track. Hence, the name track. Each conflict recurrence, however, does not come insidiously, but only with a renewed DHS.

All the psychological questionnaire examinations, which seemed to be objective, if they only asked “loss of a partner” and wanted to examine whether this would cause increased cancer morbidity, have failed because of these psychological peculiarities or the very special feeling in the moment of the DHS. Cancer always develops in the second of the DHS! A good doctor must be able to put himself into the soul of an infant, even an embryo, an older man, a young girl, or an animal, and at the same time, he must be able to put himself into the current situation of the DHS. Only in this way can he find out the difference between a problem – of which we have hundreds – and a biological conflict. Like the DHS, which can be proved in the exact second in the brain as HH, it is also religious-philosophically no longer to deny. 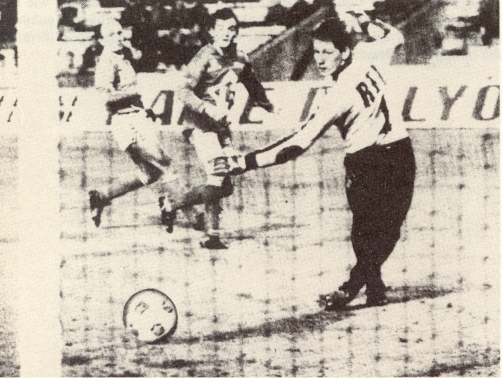 This sports photo from a Lyon newspaper illustrates how a goalkeeper is ‘caught on the wrong foot,’ looking in consternation at the ball trundling very slowly into the left corner of the goal. He had expected the ball to go into the other corner.

A similar constellation in the figurative sense can be found in DHS, the conflict shock, in which the patient is also “caught on the wrong foot.” Because a conflict situation, for which he could adjust before, does not make him a DHS. Just as a goalkeeper can deliver the most fantastic brilliant saves and fist the ball out of the far corner of the goal when – yes, when it flies to where the goalkeeper had calculated it to go, so we humans can all endure many times more conflict without getting sick from it if we have time to adjust to it beforehand.