What is the Cause of Acne on the Back? German New Medicine Testimonial

What is the Cause of Acne on the Back?

I’ve been studying your seminars and testimonials for a few weeks now, and suddenly I found the answer to a question that was a serious problem for me many years ago. What is the cause of acne on the back?
I am now writing my first GHK testimonial.
When I was a child, I was very overweight, which is why I first went to a gym when I was 15. I trained six times a week, and after ten months, I participated for the first time in the championships in our city. I was third in the under-19 age group. During training, I always pushed myself to my limits and beyond. That hurts, and the body releases endorphins because of that, which is what you can get addicted to.
At 18, I was offered a job as a trainer, so I made my purpose in life my job.
One day, I noticed that people were discussing my alleged consumption of anabolic steroids behind my back. How many and which ones might I be taking?
For me, steroids were always a taboo topic, even though this topic is very common in these sports and was often offered to me. It contradicted everything that this sport meant to me. I felt that anabolic steroids were cheating anyone who was honestly doing this sport and, of course, on my body.
At some point, I developed acne on my back, which was the reason for many envious people to even more intensively speculate behind my back about my alleged steroid consumption. Acne is one of the symptoms that is claimed to be caused by excessive steroid use.
Bodybuilding also comes with a certain degree of vanity—another reason I suffered a lot from my acne. But what was worse was the stupid talk and insinuations that I would take too many anabolic steroids, so that it would fester out my back. That was a stigmatizing factor for me, especially since I rejected steroids in principle.
When I was 20, I had to do my military service and could not continue my sport. Initially, I did not even notice, but at some point, I realized that I no longer had pimples on my back. I never understood why, but I was glad that this problem had solved itself.

After my military time, professional opportunities opened up for me, which left no time for me to return to the gym. Also the acne on my back never returned.
Now that I am studying Germanische Heilkunde and have watched your video on acne, I suddenly understand what has caused my acne.
Your description; acne is the healing phase of a defilement conflict, and at the back means that someone is talking bad about you behind your back.
I cannot think of a better way to describe the conflict I experienced back in my bodyI have always practiced this sport honestly, but with a lot of ambition. I dislike anyone who takes the chemical shortcut and cheats me, but also himself.
All the worse was the stupid talk of the envious with their false speculation behind my back, which I couldn’t stop. I really suffered from this defilement, and even my acne seemed to confirm these insinuations.
Every day, I triggered my track, and when I got home, I was in the healing phase, which caused my huge pus-filled pimples.
This issue was resolved in the military; I left that sport and, with it, the talk that was my track.

John, I appreciate your valuable work; thanks to your video, I understand why I had this acne over twenty years ago, and no matter what I tried, nothing could help me until it suddenly disappeared. 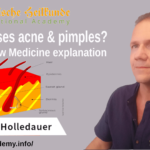 What are Causes of Acne and Pimples? – German New Medicine Explanation

Today’s Topic: What are Causes of Acne & Pimples? The dermis is controlled by the cerebellum, which is part of the old brain. The conflict content with the dermis is the attack, defilement, disfigurement, but also violation of my integrity.

Shingles because of the inheritance dispute of a house If I were to give a grade for this testimonial, it would be a “Germanic A.” K.B., self-employed, 62 years, right-hander Years ago, a contract of inheritance was drawn up by