Vomiting and Diarrhea of the Whole Family; a Testimonial from Natalie

There are, by nature, biologically correct-thinking people …

Today once again, a testimonial from Natalie, this one is on the subject of vomiting and diarrhea.
A few weeks ago, the whole family was affected. My husband and I reacted to the same situation with precisely the same conflict—indigestible anger with the aspect of starvation. We were in a situation where we were forced to pay a lot of money for something we didn’t even want. I resolved this conflict first, and a few days later, my husband did too.

Separately, our 9-year-old son suffered an identical conflict, but it was about food in real terms. But also, our one and a half-year-old, he does not want to get off my breast.

My attempt to reduce his breast and provide him with other food also ended up being just as indigestible anger for him with the aspect of starvation.
Within a week, we all had identical symptoms, vomiting and diarrhea, and fever for days. In these SBS, the upper and lower small intestines react with constipation in the conflict-active phase and the same symptoms described in the healing phase.

To identify the individual conflict experience of each of us, we were forced to deal with this particular program more intensively.
In the process, I remembered a story that I had experienced as a child, which is actually the story I want to tell here.

I was not aware of what wise uncle I had

It was 1996; I was nine years young at that time. An aunt celebrated her 55th birthday and retired at the same time. Two occasions that had to be celebrated in a big way.

My grandmother offered to bake three cakes for this big party. Huge, big, with lots of cream and decorations.
To me, she threatened, “don’t you dare stick a finger in there!”

The time came, and my uncle, my father’s brother, came to pick up the three cakes.
He entered the kitchen, looked at the table, the three cakes and me next to them, his eyes wide at the cakes.
Without saying a word, he took a knife, cut a generous piece out of one of the cakes, and handed it to me.
I thought, “Boa, but he dares something,” who will now be punished for this, he or I?

Then my grandmother came into the kitchen and saw me with the big piece of cake and spontaneously scolded my uncle.
He replied, “The girl has to get a piece of the cake, or she will vomit.”
My grandmother didn’t understand what he was trying to say. Why would I puke?

So, my uncle explained that it had been the same with him when he was a little boy. There was cake, and he didn’t get anything. He had been puking on it for several days, and he didn’t want the girl (me) to puke, so she had to get her piece of cake.

The remarkable thing about this story was that none of us had ever known anything about Dr. Hamer or his (at that time still) “New Medicine.”
As a child, my uncle had recognized very well that his anger at not having been given a cake was the cause of his vomiting, which started shortly afterward, and he remembered it well.
Then, as an adult, he spontaneously did the right thing when he saw another child who was in precisely the same situation. The girl must get a piece of the cake because otherwise, she too will vomit, and he doesn’t want that.

I have known and studied the GHK for 13 years, but this story never crossed my mind until we were forced to look more closely at exactly these SBS, both with our children and with us.

If this uncle had known the Germanische Heilkunde, I would say, “Yes, he spontaneously acted correctly according to his knowledge of the GHK. Well done!”
But his doing was motivated by his own experience and human common sense, both together spontaneously correctly averted.
I am afterward very impressed because I did not know which wise uncle I had!

Good day, I got rid of chronic cramps and diarrhea after 27 years. I thank you and your commitment to the truth. One really can relate to and experience GHK for oneself. Thanks to you, I discovered a 27-year-old conflict 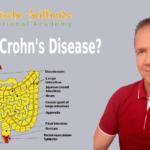 Knowing what causes Crohn’s disease. In Crohn’s disease, the small intestine is in what is called hanging healing of an indigestible anger conflict, with the aspect of starvation. Indigestible means either a morsel is stuck and can’t be digested, or

Stomach Cramps & Diarrhea because an intelligent business partner had gotten his C-Vaccination On Monday, after dinner, my stomach started cramping. These short bursts of pain usually lasted only 5 to 10 seconds, but they quickly disappeared. I could not

One Dog & 12 Cats with diarrhea, what could possibly go wrong? Anyone who has pets knows the vexed issue: what to do on vacation? When traveling, taking the animal with you is not always possible, and who wants to