In the spring of 1988, I gave birth to our first son, and it was my stated objective that I wanted to breastfeed the baby under all circumstances. The birth did not proceed optimally, and my son was born with the help of a vacuum bell. Soon he was diagnosed with what is called infant jaundice. Logically, the baby was tired and exhausted from the birth and hepatitis; he had trouble drinking and kept falling asleep. I tried my best, but the baby seemed unable to take a drop of my milk. One morning, after I was convinced that the baby had drunk some of the milk I had given him, the nurse appeared in the room again after weighing my baby and announced, gloatingly it seemed to me, “Nothing again!” This statement totally hit me, and I was frustrated and distraught that I should fail in doing the most natural thing in the world.

Anyway, after much effort and with the help of the empathetic care of another nurse, I managed to breastfeed my child fully. I was happy to have still managed it and had plenty of milk.

So far, so good, except that it was now tough to wean. My son refused to breastfeed when he was just under a year old, so I had no choice and suffered with full breasts.

Soon after, I was pregnant again, already at the 1st ovulation since birth.

Everything went smoothly, and I could breastfeed my daughter and did not develop hepatitis. After the hospital stay at home, we were soon visited by the insurance expert because my husband wanted to start his own business and make some arrangements in this regard. I was unsure and told my husband that I did not believe he could secure our existence with his own company, now that I could not contribute anything and wanted and had to look after the two children.

Fortunately, everything developed quite well, and I wished for a third child, but this wasn’t easy because I had never ovulated since the 2nd birth.

Likewise, weaning had been hard again; the 2nd child suddenly refused the breast at ten months. With the help of a hormone supplement, I became pregnant less than three years later. Successful breastfeeding, but this time I wanted to determine the time of weaning myself and decided after a brutal bite of my daughter in the nipple that the moment had come. The milk would not dry up, I no longer wanted to breastfeed, so it sometimes flowed more, sometimes less.

It bothered me in the long run, and various clarifications and treatments at the doctor’s resulted in me undergoing a magnetic resonance examination of my brain. The diagnosis: a tumor on the pituitary gland, nothing serious; it could be operated on. The operation was a bit tricky, but the only specialist in Switzerland would do it. He explained that I was a “hormonally old woman” and that, at 32, very encouraging indeed. To my great good fortune, he decided not to operate, the reasons for which became clear to me only later. (In my opinion, my gynecologist explained that, in general, such surgeries were not performed because, in my opinion, they caused too much damage to the optic nerve, among other things). I had to deal with myself and look for other ways to heal. I found help from a homeopath, and my hormone levels returned to normal over time. Hormonally I was again according to my age.

Half a year ago, I got to know Germanische Heilkunde, former German New Medicine and dealt with my pituitary gland again.

Soon I discovered my conflict at that time. It was: not being able to feed my child.

The pituitary gland increased its volume with a tumor to produce more prolactin so that I could secure my child’s nutrition with enough breast milk. I do not know if the conflict was completely resolved.

I suffered the relapse probably when my husband became self-employed, shortly after the birth of the 2nd child. I feared that our existence would not be secured, I and we would not be able to feed our children. As a result, I did not ovulate even after weaning because prolactin was significantly elevated. Ovulation was induced using hormone depressants to be able to get pregnant again.

Even after weaning the 3rd child, the prolactin level remained highly elevated and did not change; the milk kept flowing, albeit sparsely. For some time, I swallowed again the (expensive) hormone depressant medication, which changed my personality and figure (it was positive, though!) a lot, stopped the milk flow, but made me very suspicious and worried, so I stopped taking it.

Only the treatment at the homeopath, who said: “Your program is, as a result of the 1st birth under contraceptives, out of control”, calmed me down, and the globules probably restored my mental balance and thus a normal hormonal situation. Besides, our existence was and is secured earlier, at that time, and until today, as far as that is possible. Thus, nothing more stood in the way of a definitive conflict resolution.

I am glad that I do not have to speculate anymore and that I can understand the laws of the GHK, and I recognize the logic in it with this history experienced in my own body. I would be glad about corresponding hints or corrections if there are still some ambiguities.

So far, so straightforward. A great testimonial about the SBS of the pituitary gland. The writer will probably have had night sweats after the conflict resolution.

It would also be sad if a material vibration could bring an SBS wanted by nature to stop; without solving the cause first. That would not make sense! 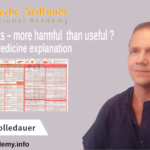 Meaning of Proper Nutrients and Diets in the German New Medicine The GHK applies to the diseases that arise from themselves. So for cancer, chronic diseases, allergies, and psychoses. It does not apply to injury, poisoning, or extreme malnutrition, such