I would like to relate my smoker’s cough testimonial, which shows, among other things, how dietary changes can apparently lead to success.

About 17 years ago, I started coughing like a smoker in the morning, about an hour after getting up. I have never smoked. I was very ‘mucousy,’ and I had to cough for about 30 minutes to 1 hour to clear my throat and lungs. This persisted for many years until I changed some things in my diet, because I wanted to follow a detox protocol. It was only after a few months that I noticed that the phlegm had disappeared, and I didn’t even think about coughing in the morning anymore. I credited this phenomenon to the detox protocol, which, among other things, eliminated all dairy products, which are often considered to be mucus-forming.

When I began studying German New Medicine, I looked for an explanation from the point of view of GNM/GHK. Mucus is produced by the goblet cells of the bronchi; the associated conflict is the fear of suffocation or the morsel of air you can’t get in.

The associated DHS came to mind: during preschool, I choked on a cough drop in the car when my mother suddenly stepped on the brake at a stoplight. I couldn’t get it out of my throat on my own; my mother had to hold me up by my legs and shake me. It was definitely highly acute-dramatic, completely unexpected, and isolating (I was sitting alone in the back seat and had to make myself noticed first). I also had problems swallowing pills all my life. As a child, I couldn’t do it at all; I couldn’t even swallow grape seeds.

Only as a young adult, after intensive practice, I managed to swallow tiny pills, but it was never easy or pleasant. After DHS I consistently avoided all candies; I was panic-stricken about swallowing them.

But about 17 years ago, after a few annoying experiences with tonsillar angina, I got used to sucking cough drops. Hoping to prevent further sore throats, I had herbal or honey candies on my cheek almost around the clock.

When I decided to change my diet, I stopped sucking the candies because they contained “forbidden” ingredients. Life went smoothly without the cough drops, and the issue of sore throats was over (that would be another testimonial). Thus, I avoided the track candy and had no more recurrences until – yes, until three weeks ago.

I occasionally take vitamin B12 tablets, which have been very small and thin. The manufacturer suddenly changed the shape, and the tablets in the latest packages were much thicker. This meant I had a hard time swallowing them. Shortly afterward, I noticed the morning mucus again. Not as strong as before, but clearly present. And after a bit of thinking, I came up with the cause; the thicker tablets had activated the SBS again, and I was on track. So, I started to dissolve the tablets in liquid, and the mucus disappeared again.

Isn’t it fascinating to see how the Germanic makes everything fit together logically.

There is nothing to correct or shorten about this testimonial. It is perfectly and very concisely explained. Taking the cough drops as a preventive measure due to a resolved sore throat angina originates from the old way of thinking and only made everything worse. It is difficult to solve this conflict and the track can really only be avoided because at any moment you can choke on something. But at least you have identified the actual cause and the track, and you can avoid it easily. 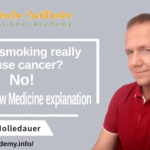 Smoking Causes Which Cancer? None!

Smoking Causes Which Cancer? None! Are we just being scientifically deceived? When you read on a pack of cigarettes: “Tobacco smoke contains more than 70 substances that have been proven to be carcinogenic,” then you should think a little. It