A brutal separation conflict with rheumatism of the periosteum because of kissing pictures from the mother with her boyfriend.

I 35 y, male RH, experienced the SBS periosteum on Pentecost Saturday evening on my own body.

The symptom began in the evening in the right ankle. I didn’t think much about it and wrapped the foot in a warm cloth so that I could sleep through the night.

On Sunday, my left wrist started to hurt as well. The pain was permanent and evenly flowing (rheumatism). It was noticeable and bearable during the day, but at night it was unbearable, so I could hardly sleep. I tried a bit with ointments, which helped for about 3-4 hours, but then I was always awake.

The week was not very pleasant, with little sleep. I remembered from the SBS Tutorial about the periosteum that there are no or few swelling symptoms with the periosteum and that the pain occurred in the conflict-active phase. According to the chart, the periosteum is related to a “Brutal Separation Conflict.”

Thus, I knew the conflict was still active. So, I looked at my cell phone. With whom I had written that Pentecost Saturday.

It suddenly became clear to me who was the deciding factor. My mother sent me the day pictures of herself and her boyfriend kissing at an event. I don’t like him that much and think that this person is not suitable for her. I was so upset that I immediately deleted the pictures, and at that moment (highly acute-dramatic, unexpected, isolative perceived), the SBS started.

I wanted to separate my mother from her boyfriend.

Left-hand knuckle is on my mother/child side, back of my hand for push away, and right foot partner side for “get lost.”

The following Saturday, I realized what my feelings were doing to me, and I thought about how I had no real influence on my mother’s relationship. After all, it is her decision which she is with and happy with. That Saturday night, I was no longer in pain, and I was finally able to sleep through the first night in a week. In the days after that, there was still some slight pain in the joints, but significantly more bearable than the week before. After two weeks, all pain was gone. I am glad I had researched and was able to bring the SBS to a close.

Actually, this experience report is worth its weight in gold and almost inexhaustible in aspects that are worth looking at more closely from the perspective of German New Medicine. But before that, many thanks to the author for this testimonial. I wish humanity had your knowledge. It would suffer less.

I put this testimonial cheekily under “children” to show that we always remain the child of our mother, no matter how old we are.

His brutal separation was perceived at the moment the DHS started the SBS of the periosteum. The periosteum belongs to the so-called “gullet-mucous pattern,” which is why the conflict-active phase hurts. This pain is called rheumatism. But this SBS has nothing to do with joint rheumatism, which belongs to the connective tissue and hurts healing (self-devaluation conflict).

In the past, the bone was covered with squamous epithelium, which has receded in the course of evolutionary history. What remained is today’s periosteum, a kind of nerve plexus. For this reason, this SBS makes neither cell+ nor cell-; therefore, periosteum inflammation cannot exist.

This rheumatic pain is stabbing, similar to the pain of thawing limbs.

Many people have suffered from rheumatism for many years.

The young man grew up with the smartphone, used it as a memory aid, and immediately found his conflict. Would that have been so easy without the cell phone? Older people have a more challenging time.

The described localization alone (left back of the hand and right outside (?!) foot), determined by his handedness sideways, shows how precisely Dr. Hamer has found all this out.

And now, I think, comes the ultimate hammer; conflict resolution!

By recognizing the conflict, he was able to resolve it immediately. He describes incredibly well how he did that. By changing the inner view, you can solve conflicts. It can work that simple!

One becomes independent of conventional medicine, which some do not approve of at all. But we should not care about that anymore. The Deep State is just dying, and the crocuses are blooming for the Germanische Heilkunde, former German New Medicine.

Bone Periosteum The Bone and the Periosteum reacted to the same Conflict Experience. I am a 35yr old male, right-handed, and I experienced a SBS periosteum on Pentecost Saturday evening on my own body. The symptoms started in my right 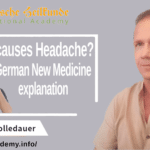 The Cause of Headaches?

There are the Following Special Programs as the Cause of Headaches. What does a headache mean?  Answering this question is not easy because there are several possibilities for this. Any edema could be responsible for headaches. However, the brain itself

Fibromyalgia in the daughter because she was too slow to save her father’s life Left-handed Woman: When my father died, he collapsed in the bathroom Symptoms: Burning pain in arms and legs, but not like rheumatoid arthritis, but like the