The Bone and the Periosteum reacted to the same Conflict Experience.

I am a 35yr old male, right-handed, and I experienced a SBS periosteum on Pentecost Saturday evening on my own body.

The symptoms started in my right ankle in the evening. I did not think about it and wrapped my foot in a warm cloth so that I could sleep through the night. On Sunday, my left wrist also started to hurt. The pain was constant and evenly flowing (rheumatism) and was noticeable and bearable during the day, but unbearable at night, so I was unable to sleep. I tried to use ointments a little bit, which was helpful for about 3–4 hours, but then I was constantly awake.

The week was not very pleasant, with very little sleep. I remembered from the video SBS-Periosteum that there were no or few swelling symptoms in the bone skin and that the pain occurred during the conflict-active phase. The chart shows that the periosteum is related to a “brutal separation conflict.” So, I knew the conflict was still active. I then checked my cell phone to see who I had been texting with that Pentecost Saturday.

It suddenly became apparent to me who was the deciding factor. On that day, my mother sent me pictures of herself and her boyfriend kissing at an event. I don’t really like him that much, and I also think that he is not really good for her. I was so upset that I deleted the pictures immediately, and then the SBS started.

I wanted to be separated from my mother and get rid of her boyfriend. The left-hand ankle is on my mother/child side, and the back of the hand is for pushing her away. The right foot on my partner side is for her boyfriend “get lost.”

The following Saturday, I understood what effect my opinions were having on me, and I realised that I have no real influence on my mother’s relationship. After all, it is her choice who she is with and who she is happy with. That Saturday night, I was no longer in pain, and for the first time in a week, I was able to sleep through the night. There was some pain in the joints after that, but it was less severe than it was a week before. After two weeks, all the pain was gone. I am glad I had researched and was able to bring the SBS to a close.

Note by Pilhar
This testimonial is worth its weight in gold and almost inexhaustible in aspects that are worthy of consideration from the perspective of Germanische Heilkunde. Many thanks to the author for this testimonial. I wish humanity would have your knowledge. It would suffer less.

In order to show that we always remain the child of our mother, no matter how old we are, I categorize this testimonial as “Children.”
The brutal separation he experienced at the moment of the DHS started the SBS of the periosteum. The conflict-active phase hurts because the periosteum belongs to the so-called gullet-mucosa pattern.

This painful condition is known as rheumatism. But this SBS is not related to the rheumatism of the joints, which belongs to the connective tissue and hurts during the healing phase (self-devaluation conflict).

The history of development shows that the bone used to be covered with squamous epithelium. Today all that is left is the periosteum, a kind of nerve plexus. periosteum inflammation can’t exist because this SBS doesn’t make cell plus or cell minus.
Painful nerves.
Nerves that belong to the so-called pharyngeal-mucosal pattern hurt in the conflict-active phase.
Those nerves that belong to the outer-skin pattern hurt in the healing phase. Dr. Hamer classified the periosteum among the functional failures.
This rheumatic pain is stabbing, similar to the pain of thawing limbs. Many people suffer from rheumatism for many years.

The young man grew up with the smartphone and was able to use it as a memory aid and immediately found his conflict. Would that have been so easy without the cell phone? Older people would have a harder time.
According to his handedness, the described localization (back of the left hand and outside of the right foot) shows how precise Dr. Hamer was in his research.
Finally, here comes the big hammer! The conflict resolution! He was able to solve the conflict immediately by recognizing it. He explains in great detail how he accomplished this. Change your attitude, and you can solve conflicts. It can work that easily!
One becomes independent from conventional medicine, which some people do not approve of. But we should no longer be concerned about that. The Deep State is dying, and the crocuses of Germanische Heilkunde are blooming. 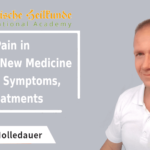 Does pain mean the beginning of the end? This meaning Pain is not always a sign of the healing phase. In some special programs, pain is a symptom of the conflict-active phase. In Germanische Heilkunde, you don’t have to memorize

A brutal separation conflict with rheumatism of the periosteum because of kissing pictures from the mother with her boyfriend. I 35 y, male RH, experienced the SBS periosteum on Pentecost Saturday evening on my own body. The symptom began in