Hair Loss and Herpes during breastfeeding, what is the cause? Breastfeeding side effects?

I am a mother of 2 sons. I have known German New Medicine in great detail for many years and have integrated it into my life. Whenever symptoms occur in me, my husband, or our children, we automatically try to find the cause according to our knowledge of German New Medicine and solve it if possible. The approach of conventional medicine is now completely strange and incomprehensible to us.

Of course, I breastfeed my children, the older ones, for 18 months. I remember having a problem with my very long hair during that time. I was losing it to such an extent that I was scared and panicked.

My long hair was everywhere; it was only getting less and less on my head. I felt like crying because of it. At that time, I fell into the old thinking that I lacked minerals because of breastfeeding, which I tried to supply with food supplements and silica. However, this did not change my hair loss, no matter how many of the home remedies I took.

For some reason, at that time, we did not come up with the idea of researching a separation conflict as the cause for the tremendous hair loss. It was after I had weaned that my hair loss stopped on its own.

The biological sense of the underlying program is short-term memory. It helps to forget the individual from whom one has been separated or from whom one wants to be separated, and thus I could not find the conflict.

After weaning, the conflict resolved itself, and the programs stopped, so I was suddenly aware of my conflict. For 18 months, it never crossed my mind, although it was omnipresent every day.

My son was constantly pulling my hair while breastfeeding, and I didn’t know how to protect myself from it. Somehow he always found a way to get to my hair, to grab onto it and pull, no matter how I tried to keep it out of his reach.

At the latest, after weaning, these conflicts are resolved.

With the weaning, the problem had causally solved itself. My hair all grew again, as solid and long as before. My short-term memory also worked again, and a light came on for me.

My younger son will soon be one year old, and I am breastfeeding him too. He is huge for his age and literally sucks me dry.

I don’t take any supplements, and I don’t have hair loss. Instead, I suffered from herpes/fever blister for the first time in my life until a month ago. Again, a separation conflict. Again, this symptom only appeared with breastfeeding. Does breastfeeding cause herpes?

After three days of herpes, I had once, when breastfeeding, mentally taken the time to think about what I was separated from at the lip, or I would like to be separated from. Suddenly, I noticed that my son was always digging his fingers into my mouth and nose. He always has, every time I breastfeed, every time he is within reach. Annoying, and I do not know how to protect myself from this.

After this realization, I consciously made sure to hold the little one so that he could not reach my face with his finger, which is not easy, and lo and behold, the cold sore healed and has not been seen for a month now. However, he continues to try his fingers in my mouth at every opportunity. But the conflict is resolved by realizing – aha, that’s it, annoying, but not that bad. Pulling my hair would be much worse.

It is easy to help yourself once you become aware of the cause. You have to get into the habit of always making yourself aware of the active program, thinking about what must be the cause, according to German New Medicine, and then looking for it in your daily life.

Because, as Helmut always states, there is no such thing as a pregnant virgin. If I have an organ symptom, there must also be a conflict.

If there is an organ symptom, there must have been a corresponding conflict on the level of the psyche. Who does not have any symptoms or aches and pains? Almost everyone has some slight ailment. Thus, we have at any time at ourselves the possibility to examine whether the Germanic is correct or not.

To be assured that the Germanic is true can mean the difference between life and death in extreme cases. In the case of cancer, if you do not know whether you have to change your life or whether a globule could be enough, it usually ends tragically. 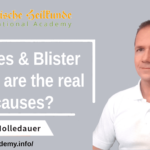 Herpes Blister Mouth – What are the real causes?

If there are no viruses, what causes herpes blister mouth? To pinpoint the cause of a symptom, we must first determine the tissue that has reacted. If we know which tissue is affected, we know which conflict to look for.

Weaning because of the job, but why does menstruation remain absent after pregnancy? I can still remember what you told me on the subject of pregnancy and the menstrual period, for example, that the period is absent, even after birth,

A very stressful conflict during pregnancy caused an Endometrium Ca and miscarriage. This testimonial shows how important it is to protect a pregnant woman from stress. Dear German New Medicine students and teachers, I want to share a testimonial with