Psychoses, depressions and their causes

Psychoses, depression, and their causes.

In all psychiatric clinics of the world, one has tried for a long time to find the reason for the illness psychosis in the patients’ history, in vain. Indeed, it has often been impossible to overlook that drastic experiences, and conflictive experiences had preceded a psychotic illness outbreak. Still, with the best will in the world, one could never discover a system in it. Although almost all psychiatric hospitals now have a computed tomography (CT) scanner, no one has ever noticed anything because psychiatrists usually don’t know anything about brain CTs and neuroradiologists are not interested in biological conflicts. The puzzle was as tricky as it was simple.

In the following, knowledge of the biological laws of Germanische Heilkunde® is essentially assumed to be known. 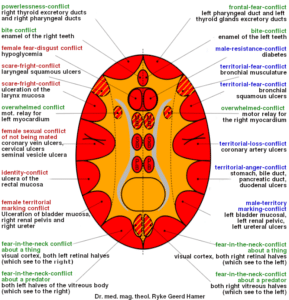 The constellation for depression is always beside the territorial conflict. In the case of the unique hormonal constellation, the hormonal stalemate between male and female hormone level. i.e., either in the case of an adolescent or post-menopausal amenorrhea, i.e., in the case of masculinization of women or feminization of men. In the left-handed woman, for example, in the sexual (female) conflict, while in the right-handed woman only shortly before or after menopause, i.e., in the so-called “hormonal stalemate.” The male can suffer depression just when he is experiencing a territorial conflict, i.e., also in the “hormonal stalemate,” as long as he is right-handed. On the other hand, the left-handed man suffers depression if he already reacts no longer male but already female and suffers a female-sexual conflict and hormonal stalemate.

This also tells us why so many women get their “involvement depression” after menopause. They account for 3/4 of depression in women. The remaining quarter is young masculine women with amenorrhea, while the post-menopausal women who get depression usually show beard growth, have a deep voice, and are “the boss” at home. Only such “masculine women” can suffer psychologically from a territorial conflict like a man because a feminine woman cannot suffer a territorial conflict, except the left-handed woman. Therefore, the determination of left- or right-handedness is of very great importance.

Clap test: If you clap like in the theater, the hand on top determines the handedness. It is so important because it decides on the conflict/brain path. Thus, it also decides which “disease” the patient(s) can suffer in which conflict and conflict we have to expect a depression.

The left-handedness also shows us in a very special way that the biological conflicts have nothing to do primarily with Freud and conventional psychology, but are really biologically determined. Because a left-handed young woman suffers from a sexual conflict, the organic symptoms of a male territorial conflict (angina pectoris) and thereby suffers depression in the psychological area would not make any sense “purely psychologically.” And another peculiarity: A left-handed woman who suffers from a female-sexual conflict, but as a left-handed woman shows her Hamer Focus (HH) (shooting target configuration in the brain) in the right periinsular area, she never loses her ovarian function. So she still has her ovulation and her period bleeding, while a right-handed woman then has no ovulation. In the past, in many often young girls or women, the conflict after the DHS lasted because the girls quite seriously believed they were pregnant due to the amenorrhea. Ovulation does not occur again until the resolution of the sexual conflict has occurred. That is, the woman has mated again. However, in this conflict-active phase, the woman may react masculinely, depending on the initial hormonal situation and the degree of estrogen blockade. Therefore, such patients, e.g., with conflict-active sexual conflict (in the case of the man, territorial conflict), are in constant danger of reacting contralaterally, both psychically and cerebrally and organically, when the next conflict DHS arrives, and thus immediately get into the “schizophrenic constellation,” whereby then simply “nothing works anymore,” the computer “locks” the brain, switches to “error.” But what one calls psychosis, the other calls “nervous breakdown” or speaks of the patient having “gone crazy once,” having had a “frenzy,” or having “gone crazy once.”

The whole thing is apparently worsened because the patients in such a case must, of course, suffer a “depressive schizophrenic constellation” or a “schizophrenic depressive constellation,” whereby clinically, sometimes one component seems to predominate, sometimes the other. But it is essential to know that there is no such thing as schizophrenia as an essential characteristic or trait. There is only one schizophrenic constellation, and it is in principle temporary and can be resolved at any time. This has nothing to do with heredity. One can only inherit, for example, a disposition to an ambivalent hormonal situation, a tendency to a hormonal stalemate. But you never have to get sick in your life if you do not suffer from a corresponding DHS or if you can avoid it.

I once experienced a patient in a doubly conflict-active phase. She was like glass threatening to shatter at any moment, icily taciturn, maximally suspicious, and intense depression, also aggressive and constantly on the move like a ravenous animal. Not a smile crossed her face. She sat there – almost obdurate – as if she were to be executed in the next hour. A classic combination of “schizophrenic constellation” and “depressive constellation.”

Without knowledge of this system, the previous treatment of such patients was highly problematic. Because they were mostly in “schizophrenic constellation obduracy” and in “depressive moodiness, melancholy, and indifference.” Consequently, one got out of such patients as good as nothing and had to limit oneself to the symptomatology description. Causal therapy was not possible. Symptomatic pseudo therapy regularly consisted of “sedation,” i.e., “drug club” or a medicinal straitjacket. The patients dozed off, pumped full of drugs of all kinds.

So while the depressions arise with “hormonal stalemate,” the schizophrenia or schizophrenic constellation is something completely different. There are always 2 conflicts in different brain hemispheres, which bring the computer brain out of rhythm. Here we are not talking about a “hormone stalemate,” but here we are talking about a “hemisphere stalemate.” But there are a lot of other constellations besides the combinations as mentioned above, for example

The sex hormones affect every single cell of the body and change them accordingly in a sex-specific manner; they have a powerful influence – albeit in interaction – on the brain. Although we are familiar with the so-called interaction of organs to the brain and the psyche to the brain, it has a special dimension concerning sex hormones. Any manipulation of the hormonal constellation in the direction of “hormonal stalemate” can, as we have seen, e.g., in case of suffering a territorial conflict, immediately lead to depression! The conflict’s solution is mostly much more difficult than if we would have a simple territorial conflict because, in such a depressive phase, the patient is less open to rational considerations than someone who is “only” in territorial conflict activity.

It is essential to know that the hormonal stalemate means only one relation, a stalemate between male and female hormone levels, i.e., between androgens and estrogens. If the hormonal situation changes, then the feeling of conflict changes as well, i.e., the same event is then processed in a completely different way. In the case of menopause with virilization of the woman, it is no longer felt as a female conflict, e.g., of “not being mated,” but as a territorial conflict in the male understanding.

[Remark:
The left-handed man feels at the first conflict like the right-handed man – namely with male conflicts. However, due to the left-handedness, the conflicts strike on the left (female) cortex side! In the hormonal stalemate, with slightly predominant female hormones, the conflicts are also felt female! The Hamer Focus is again on the left (female) cortex side!]

Only the “tense depression” in the conflict-active phase (ca-phase) during hormonal or hormonal stalemate can be called real depression.

The “resolved depression” is actually no longer a real depression because all patients suffering from cancer in the healing phase (pcl-phase) have it if you will.

However, since psychiatrists did not know anything about the iron rule of cancer or the course of the cancer disease, they assumed that this healing phase in deep vagotonia also belongs to depression. This is also true in a certain sense because this “solved depression” always follows the tense depression when it comes to CL. But it is nothing specifically depressive in the actual sense, has nothing to do with “loss of drive” and the like, but is quite simply the healing phase after a cancer illness, which every little animal goes through in the same way, without a psychiatrist certifying a depression for it.

All psychoses are special constellations in cancer. Depressions are quasi-single-layered cancer diseases, whereas only the hormonal constellation is multi-layered (hormonal stalemate). Therefore, in the future, we have to reorganize the mental and emotional illnesses, the psychoses, according to their origin, their real character, and basically according to the biological laws of Germanische Heilkunde®. Suppose in the future we take the trouble to retrospectively check the course of our depressives. In that case, we will find out that not only did they all follow exactly the Iron Rule of Cancer but that those who suffered a new so-called depressive phase, i.e., a recurrence (e.g., after discharge from the hospital), were also depressed. These patients had run into the knife of their old conflict scar again at home or at work (without knowing it). And that they had to suffer their next depression almost inevitably under these conditions.

Psychoanalysis cannot be applied to psychoses, but all psychiatrists know that. We must instead learn to understand them biologically, then the psychoses will no longer be “the book with seven seals” for us as before.