Those who panic make wrong and dangerous decisions.

Dear Dr. Hamer,
This testimonial is not about me, but a panic situation that I witnessed. This type of panic can arise when GHK has yet to be understood 100%. And it must be understood 100% in the farthest recesses of the mind long before a conflict or a relapse takes place. And with this deep understanding of GHK, that creates a solid foundation through which life can be understood, people no longer need to fall back on conventional medicine. We all know that conventional medicine’s only focus is on symptoms and financial gain for doctors and the pharmaceutical industry.

A couple of friends attended lectures and even seminars on GHK. Gradually, they, too, became convinced that GHK was true. Again and again, we talked together about various “diseases.” Either we knew someone who had an SBS going on, or we had some aches and pains ourselves.

He died at the end of 2014 after two years of chemotherapy. We were helpless and stunned while we watched this acquaintance run willingly to his deathbed.

The wife of the couple we are friends with suffered psychosis from a relapse. At one point she was manic, and afterwards she was depressed in psychotic. She couldn’t sleep, had little appetite, and lost weight. She talked non-stop, trying to find a way out, and couldn’t focus on anything.

For eight weeks, the whole family, husband, and two children (18 and 21 years old) were only concerned with what would be the right thing to do for the mother. We advised them to have a skull CT done and to listen to Mein Studentenmädchen around the clock. This is exactly what we had advised the acquaintance to do who died in 2014.

Unfortunately, the couple was obviously not concerned enough with GHK.

Books that lie at home also want to be read! I have read many of Dr. Hamer’s books three or four times. Thus my friends and I are becoming increasingly confident in GHK. When we are finished with one book, we read the next one, and then the first one again, and so on. Also, testimonials and websites are not only interesting, they are also instructive.

Until recently, we thought we could help our couple of friends. However, it is extremely difficult when everyone in the family is panicking. Today GHK is right, and tomorrow it is not. So it was only on the third attempt that we convinced the wife to call Dr. Hamer. Fortunately, we also reached him. The first thing he advised was to listen to Studentenmädchen around the clock and think about what the conflict could be.

Since the advice came from the discoverer himself, I thought things could only get better. But the confusion with the person concerned was now even greater, because now she was supposed to do homework and listen to Mein Studentenmädchen. To help her, we agreed that she would come to our house (they live close by), we would cook together, study the books and be there for her.

But what are the relatives going to say now that she cancels appointments with a psychiatrist? The relatives undoubtedly think that with suicidal thoughts and panic, she must be helped now!

The turmoil in the family was almost unbearable! Everyone was at a loss, yet the simplest answers were so close at hand:
1. listen to Mein Studentenmädchen
2. read books about GHK
3. look for the conflict
4. possibly have a brain CT done.

Despite the help, the wife wanted to first see a psychiatrist – unnecessarily. My friend and I hoped that she would at least not take any psychotropic drugs and continue to accept our offer of help or listen to Mein Studentenmädchen again.
I felt infinitely sorry for this person because, in this situation, she believed that something other than GHK would help better and faster. As soon as someone panics, it becomes quite difficult for friends to help. It is very difficult to get anywhere with logical or reasonable arguments. This is not a condemnation towards the wife because she can no longer think clearly. And this is the reason for this testimonial.

I want to appeal to everyone to inform themselves in advance, in detail, and repeatedly. This is so important because we thought our friends had a deep and thorough understanding of GHK to get them through this situation.
Sincerely
U.B.

There is nothing worse than panicking. And nobody is immune to it.
Example: someone mistakenly locked himself in a freezer room and was trapped. The next day he was dead. But the freezer room had been turned off. He had not frozen to death. He had died from the fear of freezing to death. If he could have been told by cell phone that the freezer room was off, nothing would have happened.

Only 40 years ago, conventional medicine had the strategy: No hard diagnoses, no hard prognoses! Often one spoke with the relatives: Grandpa has this or that disease. But don’t tell him!

Today, conventional medicine follows the strategy: It is necessary to tell the patient the whole truth! And it is forbidden to give hope!
“You have cancer and you will die soon!”

Intentionally, the guilt doctors put the patient in a panic! They know very well about the fatal consequences of such a brutal diagnosis – see “Forties Studies.”

Believing death is just around the corner, the patient actually dies of the fear of dying. And the same guilt doctors hypocritically declare, “No, all this has nothing to do with conflicts!”

A seminar participant once told the following funny incident: Her 60-year-old brother went for a check-up in perfect health. The doctor diagnosed him with cancer. Horrified, the brother shouted, “You don’t have to put that kind of crap on me!” he gave the doctor a resounding slap in the face for effect, turned on his heel and left the practice, got drunk for a few days and is still perfectly healthy.
If only this example could set a precedent!

Someone who has understood the Germanische Heilkunde would, of course, not run to a preventive medical examination. He would never let himself be examined by someone who neither knows the causes of diseases nor has understood how to heal diseases.

But someone dependent on an emergency medical measure must currently expose himself to these charlatans. And the “god in white” has been deeply anchored in his consciousness via “assisted thinking” all his life. When a few “gods” line up and predict his imminent death, the poor patient is usually ill-equipped to stand up against such an onslaught. “Maybe Hamer is wrong in my case?” He thinks!

And if he is not really saddle-firm in GHK, that is, if “faith” has not yet become “knowledge,” then he often runs voluntarily to the butcher because of the unknown symptoms. “The dumbest sheep look for their butcher themselves.”
I do not want to play the “wise man” here! However, over the years, I have already witnessed many things myself.
Therefore, inform yourself while you are healthy! 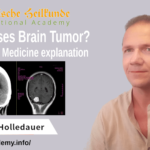 What are the Causes of Brain Tumor? – German New Medicine Explanation

Today’s Topic: What are the Causes of Brain Tumor, or more specifically, what exactly are brain tumors? The term “tumor” actually means swelling, lump, or growth. For example, if you hit your thumb with a hammer, the body immediately starts