What is the Cause of Warts on Feet? German New Medicine Testimonial

What is the cause of warts on the feet? German New Medicine – Testimonial

About two years ago, I developed an inward-growing wart on my foot that made walking difficult and painful. I could no longer wear some of my shoes because of it.

I did not understand how I got this wart and what could be the cause. Or even what I could do to get rid of it.
Cutting away the skin with nail scissors only ever gave me temporary relief. Everything else I tried to get rid of the wart was in vain, and I fought against it for about two years!

One day, my husband told me that one of his colleagues at work had an entirely different view of health and illness. He claimed that he could know the cause of any illness and, thus, how to cure the various diseases. I spontaneously thought of my wart.

One evening, my husband organized a meeting with this man to determine the cause of the wart on my foot.
Without asking much, this man told me that I must have suffered a separation conflict on my foot at that very spot of the wart, and I have been in so-called hanging healing ever since.
Something was reminding me every day of this separation conflict on my foot, which is why the skin always became thicker and thicker. Only when I could find this conflict and a solution for it would the wart disappear as spontaneously as it had appeared two years ago.

The following day, after waking up, I got out of bed, and the first thing I did was to step on our dog, who had slept next to my bed every night. Every morning I stepped on our dog first, and it annoyed me that she didn’t get it and didn’t look for another place to sleep. She always has to sleep right where I want to put my foot on the ground first. Suddenly a light went on me; now I understood what I wanted to be separated from every day, precisely at the place on my foot.

After a brief consultation with my husband’s work colleague, I firmly decided that I would continue to pet our dog before I got out of bed. And then, of course, I would step next to her and not on her, and it works.

I didn’t pay attention to it anymore, but after a few weeks, my husband asked me how my wart was doing. Only then did I realize that I had not had a problem with the wart for some time.
Only then did I look closely at the spot; the wart was gone as if it had never existed.

This little experience on my own body was so convincing that my husband and I now want to learn Germanische Heilkunde ourselves.
It is something so utterly different from everything I had learned or believed in my life about health and illness, yet I do not have to believe that it works because I had experienced it myself, in my own body. And we are grateful that we now also have the opportunity to learn Germanische Heilkunde in English. With this, we are opening a new chapter in our lives, no longer believing but knowing.
Many thanks to all who help to spread this knowledge.

Thank you!
I’m sure that thanks to your testimonial, many interested people will now be able to better understand what a wart is, what causes it, and what anyone can do about it. It doesn’t matter what you call the wart; the cause is always a separation conflict in hanging healing.
And you are right; we ourselves are responsible for helping the Germanische Heilkunde to break through, and finally leave the dark Middle Ages full of superstition and dogmas behind us. If we don’t do it, who else will?
Let me know if you need support in your studies. 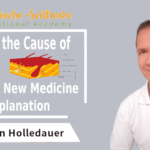