Lymph Nodes, what it is all about in Germanische Heilkunde

How does it actually work with lymph nodes?

Conventional doctors always operate on women’s axillary lymph nodes in relation to breast cancer. What is this all about?

Basically, it must be said that there are two types of lymph nodes. 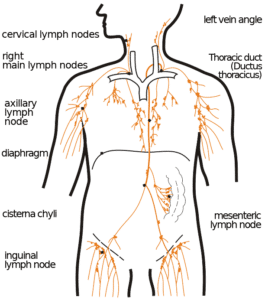 The axillary lymph nodes, for example, are currently one of the most critical chapters in connection with cancer of the female breast from conventional medicine’s perspective.

In Germanische Heilkunde®, they are a harmless marginal chapter. But we want to treat them nevertheless in detail enough.

In principle, the lymph nodes are located in the drainage area of the female breast, but of course, just as much in the arm’s drainage area, for example. If major metabolic processes are underway due to a healing process in the breast or arm, then the responsible lymph nodes usually swell. This is what conventional doctors call a benign swelling. There is no cell proliferation within the lymph nodes, but only lymph node swelling.

The situation is entirely different from the lymph nodes currently still ignorantly apostrophized as “malignant” by conventional medicine.

In the conflict-active phase, these lymph nodes make holes, i.e., necroses; under the microscope, they look like Swiss cheese. In terms of developmental history, they belong to the shoulder ball, called the humeral head in medicine, and to the upper third of the humerus bone, also called the humeral shaft.

When the lymph nodes have holes, we almost always see osteolysis in the associated skeletal part, i.e., bone decalcification. On a psychological level, this always includes a self-value conflict. So, depending on which breast is affected, to stay with this example, a feeling of inferiority in the mother/child relationship or the partner relationship.

You have to imagine it as follows:

If, for example, a child has an accident, then the mother usually blames herself most severely. She often suffers a self-value conflict at the same time as the mother/child care conflict, e.g., in the case of the right-handed woman for the left breast, in addition to the mammary gland cancer: “How could I have been so inattentive, I have been a bad mother.”

From this moment on, as long as the conflict is still conflict-active, decalcification necroses, quasi holes in the bone, form in the humeral head or upper humeral shaft and simultaneously in the associated lymph nodes also necroses or holes. The same thing can happen on the opposite side of the shoulder if, for example, in a partner-care conflict, the patient thinks, “Oh, God, I’ve been a bad wife or partner.”

If it comes to conflictolysis, in our case – if the child is healthy again and the mother realizes: “I had nothing to do with it,” i.e., if it comes to a psychological reconstruction of her self-value in the mother/child relationship or the partner relationship, then from this moment on the healing processes begin both in the bone and in the associated axillary lymph node.

The bone then makes edema in the healing phase. The periosteum stretches, which causes pain. The shoulder joint may swell, which can also be painful, as a sign that the edema water is flowing from the bone through the cartilage layer into the shoulder joint. Recalcification of the osteolysis then occurs. The bone then usually has more calcium later than before the whole process.

In the lymph nodes, the holes that had formed are also refilled with new cells, and the whole lymph node is swollen.

This refilling of the holes with new lymph node cells, the conventional doctors call “malignant,” although it is not at all! It is a very positive process, for which the patient should be congratulated.

Under no circumstances should these lymph nodes be operated out, unless a lymph node has become so large that it disturbs the patient mechanically or if it is psychologically unacceptable for her.

Until now, conventional medicine assumed that cancer cells were transported from the breast to the lymph nodes and were going crazy there. As I said, this was speculation. One has never discovered a single mammary gland cell of adenoid carcinoma in a lymph node. Still, in the lymph nodes, in the necroses that have formed during the conflict-active phase, again only lymph node cells are incorporated, and that is also only in the conflict-resolution/healing phase.

So, once again, for clarification:

The lymph nodes belong to a responsible bone. The corresponding self-devaluation conflict is only slightly weaker than it would be if the responsible bone itself were affected.

In the conflict-active phase, the lymph nodes suffer the same as the bone, namely holes or necrosis. Under the microscope, such an unenlarged lymph node looks like Swiss cheese.

As a good sign of healing, the lymph nodes swell to replenish the necroses in the healing phase. As a result, such a lymph node has cell mitoses and is therefore considered “malignant” in current conventional medicine.

Unlike a lymph node in the drainage area of an abscess, which is swollen only because of congestion, has no mitoses, and is therefore considered “benign.”

The so-called Hodgkin’s disease is also a lymph node refilled and swollen under cell mitosis in the healing phase.

Even the spleen is actually a lymph node, but a special one.

The conflict is always a self-value conflict in the broader sense, through a bleeding, big wound: bleeding and hurting conflict. This conflict is to be understood in purely biological terms.

This conflict is of the utmost importance in the wild because it is always a matter of death and life. Bleeding and injury conflict means that an individual is injured or even severely injured. It bleeds! This conflict is, therefore, a biological conflict of the self-value break.

The torn but still fleeing animal does not wait until the blood loss makes a further defense impossible but leaves the battlefield hastily. This seems to be the psychological, biological sense of the conflict.

For us humans, the biological bleeding and injury conflict is already triggered when we hear, for example, that we have “blood cancer.” Or, if we frequently receive blood transfusions, we can suffer recurrences. This is because, in our brain, we cannot distinguish blood transfusions from bleeding.

The idea that the transferred blood could be contaminated with AIDS can trigger a bleeding and injury conflict, yes, ultimately, already any “blood picture.”

In the conflict-active phase, we find splenic necrosis accompanied by thrombocytopenia. At the moment of the DHS (conflict shock), which in nature is usually synonymous with a heavily bleeding wound, the platelets rush out of the bloodstream into the spleen, where they are collected and stored. This prevents thrombosis from occurring in the blood vessels. Thrombocytopenia is, therefore, a handy emergency measure of nature. Quick splenic necrosis results for the platelets to have better space in the spleen.

In the healing phase, the necrosis fills up again through cell renewal (mitoses), which results in spleen swelling, so-called splenomegaly, which partly remains later. However, this means that in case of a renewed bleeding and injury conflict, more platelets have room in the enlarged spleen.

However, it should be mentioned at this point that the so-called non-Hodgkin’s “lymphoma” is a squamous cell carcinoma of the pharyngeal duct that is already in remission. Conflictively, it corresponds to frontal anxiety or cancer anxiety conflict.

In ca-phase: formation of ulcers in the old, silenced gill arch ducts lined with squamous epithelium. Sometimes mild pain in the neck area.

During the healing phase, the mucosa around the ulcers inside the gill arches swells. This causes cysts to form, which contain serous fluid inside. These may even extend to the diaphragm in the mediastinum. These cysts are then incorrectly called centrocystic-centroblastic non-Hodgkin’s “lymphoma.”

However, in squamous ulcer healing with the help of viruses (?), if tubular organs are involved (bronchi, coronary arteries or coronary veins, old gill arch duct ulcers, or intrahepatic bile duct ulcers), temporary occlusion of these tubular organs by swelling occurs.

In the healing phase, gill arch duct cysts. However, after several recurrences, induration of the so-called centrocystic-centroblastic non-Hodgkin’s lymphoma.

Mediastinal = belonging to the posterior heart space where the trachea, esophagus, aorta, paraaortic, and periphilaeric lymph nodes are located, the superior vena cava and the phrenic nerve, and the recurrence nerve supply the larynx.