I am female and 23 years young.

About three years ago, I first had the extremely painful symptoms of cystitis in my bladder and urethra. It hurt almost unbearable, burning pain. Whether I urinated or not, and I spent hours on the toilet.

With the use of antibiotics and painkillers, this condition lasted about two days. The doctor explained that the cause was a fungus, transmitted during sexual intercourse. My boyfriend should also be examined and treated with antibiotics. We heard the same thing in the fungal ambulance to which we were referred. But it didn’t help; everything started all over again at the next opportunity. When the relationship with my (ex) boyfriend was finally over, and cystitis no longer happened, until I met my current husband, then everything started all over again.

My husband had been involved with Germanische Heilkunde® for years, knows it very well, and also took me to the seminars. Helmut explained that I must have suffered a territorial marking conflict/belonging conflict, and I keep triggering a track. This and the DHS I would need to find out.

Of course, we had already found the track ourselves, a particular position at sex, and since we avoided this one position so as not to trigger my track with it, I also no longer had cystitis. So I didn’t solve the conflict; we just avoided the track with success.

Recently, my husband asked me if I could remember the DHS? Of course, I could.

Once I ended the relationship with my ex-boyfriend. Shortly thereafter, I met another very likable man, but unfortunately, he traveled a lot on business and therefore rarely had time for me. But I never had sex with this man. So when I went out alone on the weekend again, I happened to meet my ex-boyfriend, and I accepted his offer to take me home. One thing led to another, and we ended up in bed. We had sex in a particular position, and the whole time I was thinking about whether or not I was going to cheat on the other guy now? To whom do I actually belong now? To my ex, with whom I had just been in bed, although we no longer had a relationship, or to the new man? Two days later, I had cystitis for the first time. The following time, I got involved in a new attempt to revive my relationship with my ex, which became very painful because I suffered severe chronic cystitis.

My husband was happy to hear this because now I am happily married, and it is clear to me to whom I belong, and with the realization that the DHS no longer van happen like this, according to theory, the conflict, as well as the track, is erased. We immediately rehearsed and repeated it several times since then and…? Well, everything is fine, far and wide, no more cystitis.

It goes without saying that I have already learned Germanische Heilkunde® extensively, and I feel deep gratitude for the absolute freedom from fear of illness through this knowledge, for Dr. Hamer, the Fam. Pilhar and my husband.

I was somewhat embarrassed to report these intimate experiences. However, since I have been searching in vain for testimonials with cystitis, and since, on the other hand, many women suffer chronically from it, I decided to make my experiences available to all those affected.

The DHS is always not just highly acute-dramatic and “caught on the wrong foot” but also perceived in an isolating way. One does not talk about it …

This report lets you understand what it means to “speak it out.” Today the young woman has a husband to whom she can tell everything! What she experienced at that time is now irrelevant, and thus she was able to solve the track.

I thank the writer and her husband for this valuable testimonial. 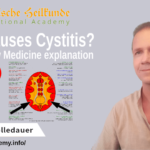 Cystitis Acute: What is the Cause? – German New Medicine Explanation

Today’s Topic: I have Cystitis Acute; what is the Cause? The bladder is internally lined with squamous mucosa, which is from the red group. This squamous mucosa belongs to the outer skin pattern and hurts in the vagotonic healing phase.