Today I would like to send you another report about my experience. It is about my son (9 years old, RH).

He visited a 6-day camp with his friend during the vacation (August). He wanted to go there voluntarily and was looking forward to it with his friend. We brought him to the camp on Sunday afternoon and said goodbye to him after a while. It was harder for us to say goodbye than it was for him because it was the first time he was away “alone” for six days.

When we picked him up from camp on Saturday afternoon six days later, we were relieved because he was happy. When asked, he only reported positively about the camp and also wanted to go again next year. Everything was great and went well, we thought!

On Sunday, he began to complain that he itched all over his body. He had red spots all over, and they were multiplying and getting bigger. It was immediately clear to me what was going on: he must have suffered a separation conflict from us (parents and siblings) at camp! I took the Knautsch book “Lisa and the red spots” and explained the sensible biological special program of the skin. Afterward, I explained to him that he must have also suffered such a separation conflict in the tent camp and asked him whether it was so, whether he felt it so. Instantly, tears stood in his eyes, and he confirmed that he had longed for us.

When the tears shoot into the eyes of the patient, you know that you have hit the bull’s eye!

Without asking, he said after he could understand that it was nice, but he would like to go next year but no more (avoid track). The next question was, how long will I have the rash and itch? I calculated for him; you were away for six days, so depending on when you suffered the conflict, you have the rash and itch for a maximum of 6 days. Six days later, the rash disappeared entirely on Friday, and since then, there was nothing. This also means that he must have suffered the separation conflict on the very first day, possibly when it was evening and dark in the tent. He counted the remaining days every day and calculated that it is now only 5,4,….1 day until it is good again.

Children and older people often generalize, which was also the case with him, so he reacted all over his body (left, right, inside, and outside). We didn’t get anything from the crisis. Only once, when going to bed, he wanted an extra blanket because he was cold.

Nice to see how the children grow up with the Germanic.

Many thanks to Dr. Hamer for his discovery and his gift to us! Thank you, also, for your efforts and for spreading the German New Medicine!

About three weeks later, he was a little bit ailing (“flu“).

Our parents had to go away on Saturday for about two h. Big sister was out with mom, and little sister went to grandmas. He preferred staying home alone for 2 hours, resting in his bed, then going to grandmas with us. We agreed that he should call if anything was wrong, and I would come immediately. I left about one h earlier than the mother. When she left, it didn’t take 15 minutes, and he called my house to see when I would be back. Another 20 minutes later, I was at his house. In the evening, he got the rash again. This went on for three days; always, in the evening, the rash came!

The only way I can explain it is that he suffered a recurrence when he was alone for a short time on Saturday, and had more recurrences the next few days through the subconscious. When he got over the “flu” after three days, no more recurrences/rashes came either. He did not mind being alone for a while, but because he was already ill, his conflict threshold was shallow, and he reacted with a relapse.

In the meantime, he was once again alone for a short time; here, he was fine and had no more relapses.

Before, the “separations” were probably a psychological problem, which does not make sick. But since the biological conflict in the tent camp, the tracks that caused the recurrences were working. Now the boy has become “allergic” to the same issue. 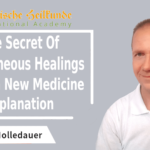