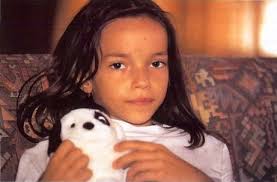 born Dec. 31st, 1988 (New Year’s Eve)
The delivery was in an alternative birth clinic because we had only bad experiences with our first child’s delivery in the LKH Wr. Neustadt.

As a father, I was present at all births.
We lived with my parents in Grünbach am Schneeberg.

In 1994, my wife started working, and we moved with our three small children to her parents. The parents-in-law had a big house and a big garden where we wanted to build our own house.
And so began Olivia’s ordeal …

For Olivia, her mother was gone from one day to the next, and she strictly refused the food of her unknown grandmother. At the same time, her stomach aches began. At night she often cried out as if she had seen a ghost, and my wife had to lie down in bed with her. Later we learned from Dr. Hamer that the pavor nocturnus was caused by a schizophrenic brainstem constellation. One of the conflicts in the brain stem was the refugee conflict with kidney collection tubes because Olivia felt abandoned by her mother. The second conflict in the brain stem was the starvation conflict with liver cancer, as she refused to eat her grandmother’s food, who was a stranger to her.

In May 1995, these abdominal pains were so bad that we went to the clinic with the child. On May 17, 1995 – coincidentally, Dr. Hamer’s 60th birthday – Olivia was diagnosed with cancer (Wilms’ tumor, dissolved fluid conflict after a near-drowning at the lake), and an incredible story began! Overnight we were in the media all the way to South Africa. The world was suddenly upside down for us! The fear for our child’s survival, the confrontation with the authorities and the media, and the masses’ incomprehension was almost maddening. The fact that we came out of it all in one piece is nothing short of a miracle! Olivia is alive!
Through Dirk’s death, Germanische Heilkunde® was discovered. Through Olivia’s suffering, Germanische Heilkunde® became known worldwide. Two children brought a gift of gods to mankind through their suffering.

We parents were deprived of custody. However, the decision could not be legally served because we were on the run. In Spain, the Austrian ambassador Esten reassigned custody to my wife. In Austria, however, this was ignored on the pretext that Mr. Esten was already senile. First, it was said that we would get back the custody with the end of the compulsory therapy. Then it was said after the end of the two-year medical follow-up. They extended the follow-up to five years. We then got custody back in 2002.

Olivia’s case was a “matter for the chiefs” of all the authorities. Olivia’s legal guardian – that is, Olivia’s “father” – was the acting district chief Marady. Mr. Marady stated that he did not understand anything about medicine, that the oncologists had his full confidence, and that he would agree to all their measures. Olivia herself he visited once in the hospital. When Mr. Marady retired a short time later, his successor Mr. Zimper became Olivia’s legal father. Mr. Zimper offered friendly personal contact and wanted to involve Dr. Hamer. Mr. Zimper was then forced into his place by the current family minister and pharmaceutical producer Bartenstein.

Immediately after Olivia’s cancer diagnosis, I sought help from Mrs. Madeleine Petrovic. She made two parliamentary inquiries as to why Germanische Heilkunde® is not finally being reviewed. She stood by Dr. Hamer in the ORF program “help-tv.” Her commitment cost her her career. Her successor became our present Federal President, Van der Bellen.

A journalist blew the whistle on our escape in Spain to the authorities and wanted to be there live when we were arrested. But his plane was delayed. We parents were arrested and tried by Interpol together with our three small children, and each time we were released. The authorities in Spain did not know what the Austrian authorities wanted because Olivia was under the medical supervision of conventional doctors, who were also Hamer doctors.

We parents were both sentenced to eight months conditional to three years for “child abduction” and “negligent infliction of bodily harm.” Because we removed our child from the legal custodian’s supervision by running away and because we injured our child’s body by not taking Olivia to chemo. The trial lasted for three days, and the appeal was a year later. The judges explicitly stated that this was not a judgment about Germanische Heilkunde®, but only because we parents had broken laws.

Confirmation of the University of Trnava 1998

The big dispute since 1981 to date is that the “Deep State” (Trump, Putin – Helsinki 2018), which includes the conventional ruling medicine, refuses to verify Germanische Heilkunde® correctly and officially by a university. In 1998 – one year after our legally binding conviction and at the same time with the release from prison of Dr. Hamer (violation of the Naturopathic Practitioners Act), we were able to present the verification of the University of Trnava. A university’s verification is “the end of the line” in the scientific business because there is no higher authority. But our authorities did not care much about that because this ruling class wanted to continue their games, especially with our children.